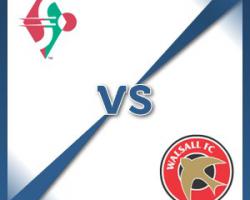 Swindon V Walsall - view commentary, squad, and statistics of the game live.Turnbull set for Robins returnSwindon are boosted by the return of Jordan Turnbull when they host Walsall.Turnbull served the second match of his two-game ban on Saturday as the Robins lost to Yeovil but while Turnbull will return to the squad, fellow defender Raphael Rossi Branco remains suspended and misses out once more.With their automatic promotion hopes in tatters, boss Mark Cooper can now start planning for the play-offs and he looks set to rest influential midfielder Massimo Luongo who has been playing with a tight groin.Amongst a number of possible changes could be a start for striker Jermaine Hylton.Walsall have no fresh injury worries, with Dean Smith set to name an unchanged squad

They are eight points above the Sky Bet League One relegation zone but boss Dean Smith is confident of survival.He told the Wolverhampton Express & Star: "Colchester can't go above us

All of the other seven teams down there could mathematically but it will be tough for them to win all their games."