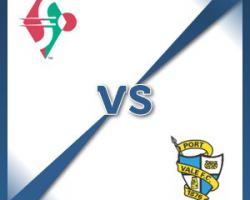 Swindon V Port Vale - view commentary, squad, and statistics of the game live.Cooper tempted by changesSwindon host Port Vale on Sunday as they look to return to the automatic promotion places in League One

A 4-1 win at Walsall on Boxing Day meant they remain hot on the heels of the top two, below second-placed MK Dons on just goal difference

Robins boss Mark Cooper hinted that he could make changes for the visit of the Valiants, and he is satisfied with the contribution from his forwards in recent weeks."We always had the two games in mind with two different opponents," he told the club's official website

All three (strikers) are contributing at the moment."Vale have no new problems and manager Rob Page could be tempted to name an unchanged team following the home victory over Sheffield United.Former Swindon striker Dany N'Guessan, who left the County Ground in the summer, should line up against his old club while the back line is not expected to be disrupted.Chris Birchall, Chris Lines and Colin Daniel provide Page with options in midfield though, should the Valiants boss wish to tinker.Tom Pope remains out with a knee ligament injury but it is hoped the striker will return to first-team contention next month