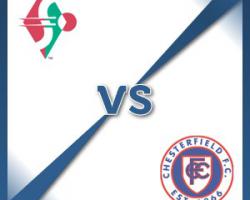 Swindon V Chesterfield - view commentary, squad, and statistics of the game live.Hylton passed fit for RobinsSwindon striker Jermaine Hylton is expected to be given the green light to face Chesterfield.Hylton, who made his debut for the Robins as a late substitute in their 3-0 win at Coventry on Monday night, had been struggling with a chest infection but he is likely to be on the bench.Back-up goalkeeper Tyrell Belford will join Hylton on the bench despite having sustained a heavy blow to his foot in a midweek development game.Captain Nathan Thompson overcame a thigh strain to complete 90 minutes against the Sky Blues and will keep his place in the Robins' line-up.Chesterfield will check on former Robin Gary Roberts.Roberts, who left Swindon in the summer of 2013 to join the Spireites, is nursing a swollen ankle following the FA Cup replay win over Scunthorpe in midweek and the winger will be assessed.Central midfielder Jimmy Ryan will also continue to be monitored as his recent groin complaint remains ongoing

The 26-year-old has come on as a substitute in each of the last two matches.Emmanuel Dieseruvwe will return to the squad, with the on-loan Sheffield Wednesday striker ineligible for Paul Cook's men in the FA Cup