Robins go to Wembley after thriller 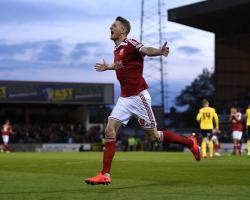 The Swindon forward stepped off the bench to grab goal eight of 10 but it proved to be crucial as Town held on despite late strikes from Matt Done and Che Evans to book a tie with Preston at the national stadium.

But an own-goal from Nathan Thompson and Chris Basham's header put the visitors back in the tie only for Smith to grab his second of the night from the spot.

Steven Davies made things interesting again before Obika struck and then, despite two late strikes, Town eventually crept over the line to spark a pitch invasion.

A late winner from Nathan Byrne at Bramall Lane meant the Blades made the trip 2-1 down on aggregate but things could have been more comfortable for Swindon had Gladwin not missed a first-half penalty.

Within five minutes of the second leg, however, the midfielder had written the wrongs with a stunning opener

Byrne's deep cross from the right was headed out as far as Gladwin who thumped a half-volley into the top corner.

The full-back kept the ball in on the right touchline and fired a low cross to the back post for Gladwin to gleefully tap home and open up a three-goal cushion.

The home support were then in dreamland with 18 minutes on the clock when Smith robbed Kieran Freeman inside the box, shifted the ball to his right and then fired home.

It was looking like a long journey home for the travelling Blades supporters but they were dreaming again two minutes later when Jamie Murphy's left-footed shot deflected off Thompson and wrong-footed Wes Foderingham .

And having survived Massimo Luongo's run and shot, United narrowed the deficit to just two goals seven minutes before the break when Bob Harris' cross was met by the diving figure of Basham.

Howard was forced to foul the frontman as he dashed past him and strike partner Smith thumped his 58th-minute penalty low into the bottom-left corner.

Yet again the visitors responded, substitute Davies heading home another Harris delivery at the back post just six minutes after his introduction to make it 4-3 on the night.

United were not done just yet, though

First, Done fired past Foderingham from close range with two minutes to go and then substitute Evans cut inside and bent home a curling left-footed shot to set up a nerve-shredding finale.