Martin Ling steps down as Swindon boss for health reasons 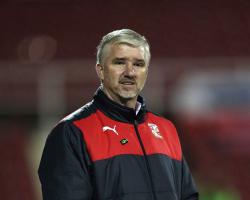 Ling only took over at the County Ground on November 3 and guided the Robins to five wins in his nine games during his 56-day spell in charge.

Ling took time out for depression during his time as Torquay manager in February 2013 and the Swindon job was his first managerial role since he left Plainmoor.

A statement on the club's official website read: "Swindon Town have today been informed that Martin Ling has resigned from his position as first team manager due to health reasons."

Ling played nearly 200 games for Swindon and was an integral part of the team that won promotion to the Premier League in 1992-93 - the Robins' only season in the top flight.

He began his managerial career with a five-and-a-half year spell at Leyton Orient before further spells at Cambridge and Torquay.

Ling's son Sam, currently on the books of Orient, tweeted: "He wants to thank everyone at Swindon for the support he was given but his family and health are more important than anything."