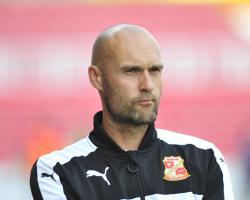 The club have decided to make a change following relegation from League One this season, despite Williams being just 13 months into a five-year contract.

He managed to keep Swindon up last season but oversaw just 11 league wins this time round during a campaign often overshadowed by the club's links with former Tottenham and Aston Villa manager Tim Sherwood, who was named director of football at the County Ground in November and was given a two-game stadium ban after admitting abusing a match official in February

Swindon's fate was sealed in the penultimate game of the season with a 2-1 home defeat to Scunthorpe, although the club failed to acknowledge the fact through any of its official outlets until 48 hours later

A club statement read: "Swindon Town can confirm that Luke Williams has left his position as head coach of the football club with immediate effect

"Following our relegation to the Sky Bet League Two, reviews have taken place and, as a result, the football club and Luke Williams have mutually agreed to go their separate ways.

"We would like to wish Luke the very best of luck for the future.

"The club would also like to confirm that the search for a new candidate to take the club forward is well underway and we will issue a further update in due course."