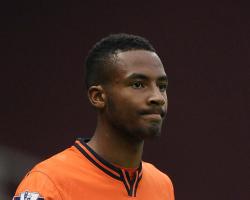 Vigouroux, who is on a season-long loan from Liverpool, paid a ÃÂ£50 fine in pennies after turning up late for training last week and the Robins were all set to send him back to Anfield.

But the apologetic Chilean stopper, who was watching their 2-2 draw with Doncaster at the Keepmoat Stadium on Tuesday night, has been given a "second chance" by Swindon boss Mark Cooper and will now remain with the County Ground outfit.

"He is going to come back

He is very humble, very apologetic and knows the way he behaved was wrong," said Cooper.

"He has apologised to the rest of the boys

I asked them the question, 'do you want him back?' and to a man they all said yes.

"The one thing about Lawrence is that he is an exceptional young goalkeeper and it is important that he learns from this little mishap and it will help him in his career going forward.

"I thought it was brilliant banter, but in the context it was the wrong way to go about it

Lawrence was desperate to come back and was very apologetic, so we have given him a second chance

He will be grateful for that and I'm sure it will make him a better professional in the years to come."

Swindon released a statement on Wednesday morning to clear up the reasoning for Vigouroux's absence in the 2-1 home defeat to Colchester over the weekend.

The statement read: "Vigouroux was late to a training session last week and was subsequently withdrawn from the starting XI against Colchester United.

"After the weekend, he was called to a meeting in Liverpool by his parent club's academy staff to explain his actions.

"Following on from this meeting, Vigouroux has now returned to SN1 and will be available for selection again by Swindon Town this weekend

Contrary to reports, his loan agreement has not been terminated.

"The club considers this disciplinary matter to have now been dealt with and would like to move on swiftly."