Late goal gets Swindon in front 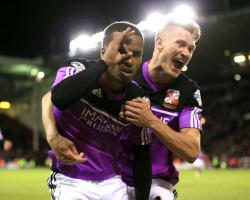 Byrne's trickery wreaked havoc with the Blades all evening but he left his biggest impact until the last moment as he struck a winner in the fourth minute of added time.

The winger had earlier won a penalty, which Ben Gladwin missed, and then set up Sam Ricketts early in the second half which cancelled out Kieron Freeman's opener for the Blades.

It means Mark Cooper's men go into Monday's second leg on home soil knowing they only need a draw to book a place at Wembley and put themselves 90 minutes away from the Championship.

In contrast defeat represents a disappointing night for the Blades, who were left seething with a string of decisions by referee Darren Bond, as they bookended the game with dominant spells, but only had Freeman's 19th-minute opener to show for it.

They must now travel to the County Ground and win or they will be consigned to an eighth unsuccessful play-off campaign and a fifth year in the third tier.

With the nature of their start you could be excused for thinking they wanted this two-legged affair won inside 45 minutes as they enjoyed a rampant opening.

Jamie Murphy was enjoying a field day and he caused havoc for the Swindon defence, first dragging a shot wide before being denied a clear penalty when his cross struck Jack Stephens on the arm.

And the hosts' reward came in the 19th minute as they took the lead their electric start had deserved.

Ryan Flynn made headway down the right and after twisting and turning he sent in a low cross which Freeman fired in with a first-time effort from 12 yards.

But, having not known what hit them, Swindon were suddenly given a chance to draw level when they were awarded a 27th-minute penalty after Byrne was fouled by Harris.

Gladwin fluffed his lines from the spot, though, as Mark Howard got down low to save his poor effort and the Blades survived.

Although they missed that opportunity, it did allow the Robins to grow into the game and United were reliant on Howard again soon after to stay in front.

Cooper's men were now bossing matters and a strong start to the second half saw them level in the 51st minute.

Byrne whipped in an enticing corner which Ricketts rose highest to and the Wales international sent a powerful header past Howard.

The Blades had been a shadow of the side which had run their visitors ragged in the opening 20 minutes but they began to stir again as the game entered the final 20.

Davies was the focal point of the Blades attack and stung Foderingham's palms with a fierce effort from 16 yards and then from the follow-up attack he missed a glaring chance as he could not make sufficient contact with his head from Murphy's cross and his effort went wide.

It looked as if the sides would be heading to Wiltshire on level terms until Byrne had the final say when he forged into the area and sent a low shot into the bottom corner to put the Robins in pole position.