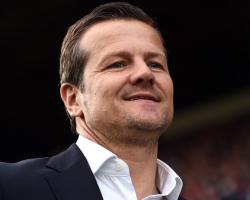 Ben Gladwin and Michael Smith both grabbed doubles and substitute Jonathan Obika netted what turned out to be the crucial goal as they advanced 7-6 on aggregate having won 2-1 at Bramall Lane on Thursday.

But that only tells the half of the story with United having reduced the deficit to just one goal on three separate occasions with two goals coming in the final minutes in a thrilling conclusion.

And Cooper was lost for breath after the final whistle as his side moved a step closer to ending their 15-year absence from the second tier.

"I really cannot put into words what I have just seen," he said

"It was a freak, I'm sure it will be talked about for decades.

"It was the most ridiculous game of football you'll ever see

"I must give credit to Nigel Clough and his players, it was an unbelievable game of football."

Preston now await in the Wembley final later this month after they cruised past Chesterfield in the other semi-final and Cooper admits the likes of Jermaine Beckford, Joe Garner and Paul Gallagher will be relishing the chance to tackle the Robins.

"I'm sure Simon Grayson was rubbing his hands together watching it and with the firepower at their disposal I'm sure they'll fancy their chances," Cooper added

"But on the Wembley surface we'll fancy ours.

Even to get to Wembley is a magnificent achievement for us.

But we are not bad going forward, we can score goals and entertain."

For Clough it was play-off heartache once again but the former Derby boss was heartened with the way his side kept going before eventually just falling short.

"In the first 15 minutes it could have been 3-3, but they put their chances away and we didn't," he explained

"The fact we were still going in the 97th and 98th minutes was encouraging.

"You cannot describe how disappointed we are."