Cooper- Job only half done 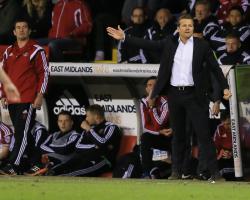 Swindon, for whom Ben Gladwin saw his 27th-minute penalty saved by home goalkeeper Mark Howard, had fought back to equalise through Sam Ricketts' thumping header early in the second half after Kieron Freeman had given the Blades a deserved 19th-minute lead.

When asked if he would change his tactics following Byrne's late strike, Cooper said: "Not at all no

We know it's only half-time."

Cooper, who picked out midfielder Yaser Kasim as his side's outstanding player, said he was proud of his players, who have given the Robins an outstanding chance of atoning for three straight previous play-off failures - in 2004, 2010 and 2013.

"For 20 minutes we really struggled to get to grips with Sheffield United's intensity," Cooper added.

"They came out really strong and pressed and the crowd got behind them and we struggled to cope.

"But after that I thought we were outstanding

We played some brilliant football in a real pressure-cooker atmosphere and I'm really proud of the players.

"But it's only half a job done

We're pleased, but we know we've got work to do."

"I was very pleased with the performance and we feel very, very hard done by to come off with a defeat," said Clough.

"We have had four major decisions go against us in the game, but we can't do anything about that.

"We can play, and put our heart and soul into it which we did

When you get three penalty appeals turned down and a goal disallowed when it shouldn't be you feel a bit hard done by."

The Blades have fallen short in seven previous play-off attempts, but Clough is not ready to concede an eighth successive failure

"We are still in it and we are more than capable of getting a result on the day," he added.

"To only score one goal on the amount of chances that we created, we deserved to score two or three at least, never mind the penalty appeals.

"Sometimes you just need a little break and we didn't get that, either in terms of decisions or in front of goal.

"I've not spoken to him (Bond) yet, it's still too early but I will be talking to him and also his coach Mr (Alan) Wiley.

"Mr Wiley is his coach, ex-Premier League referee who Sir Alex Ferguson described as overweight once.

It wasn't silly, it was just mistakes, three penalty appeals, the handball is blatant and Ryan Flynn gets two-footed when he has a shot.

"The goal from Matty Done, absolutely nothing wrong with it, the lad has gone down so easily

Four things wrong in a game of this magnitude is hard to take."